Roundway Down at Partizan

This weekend Andrew Brentnall and I enjoyed a very jolly weekend at Partizan with the Roundway Down game based on the For King and Parliament scenario that we wrote together, a few years ago. The game is perhaps best viewed in this 90-second video.

Above is the game as set up.  I had been apprehensive about a hill-failure, but mercifully it held together. The hill was perhaps 15" tall at the top.
Below is a shot from the first game- Andy Green (left) as the Royalists got off to a shocking start with some terrible cards, but pulled it around and came close to beating Matthew Hotston (with Andrew). All the photos are clickable.

Here are a couple of shots of the protagonists- Parliamentarians above and Royalists below.

Alas I got not photos of the second game, which was even closer than the first, ending, this time, in a narrow Royalist victory.

Above, Andrew brought his alternative version of the scenario, in 6mm, which generated quite a bit of interest.
I was very pleased with the general balance of the scenario, which you can find here.  We might take the game to a couple of other events in the South, later this year. I have an idea to extend the board so that I can depict the Bloody Ditch and the Parliamentarian baggage train at Oliver's Castle.
Huge thanks to Andrew who worked very hard on the running the games whilst I nattered with bystanders.
As ever, Partizan was a great event- very well run, a credit to the organisers. It's always fantastic to catch up with so many friends.  There are always a ton of lovely looking historical games, and no time at all for me to see them!
Posted by BigRedBat at 03:22 2 comments:

This afternoon Andrew Brentnall and I built the terrain for tomorrow’s big Roundway Down game at Partizan in Newark-on-Trent.

It was a complex process- the gigantic 12’ long hill is supported on ubiquitous Really Useful Boxes, anchored in place (hopefully!) by Rug Grippers. I didn’t bring quite enough boxes, and it became something of a faff to make it work.

On top of the boxes go MDF boards in various sizes.

Next there is a black cloth, to hide the workings, more rug gripper and the hand-gridded Geek Villain mats from a previous post, joined together at the edges with double-sided tape.
Finally we added the miniatures and some trees, then I shot a brief video of the finished article. I’ll shoot some more video of the forces in the morning.  Hope to see some of you at Partizan tomorrow!
Posted by BigRedBat at 16:00 1 comment:

All the ECW horse

Today chum Ian came around and helped me to sort out all of my ECW cavalry. I say sort- many of the regiments had become mixed up after their last outing (at the Wargames Holiday Centre- three or even four years ago!), and we had to work out what fitted with what. I've recently added three or four new regiments bringing the total to eighteen. You can click on the above image for a closeup.

Better still, I've recorded a brief YouTube video, below, describing them- I think it is the first I've ever posted. I hope you enjoy it.

On Sunday I'll have the majority of these cavalry and a few infantry, too, at Partizan in Newark. I hope to see some of you there!

Here are the final markers for Roundway, these are FK&P pursuit markers, and depict rider-less horses and horses carrying injured riders; photo is clickable. They are used to show when a cavalry unit is in an uncontrolled advance. They are a mix of odd horses I had spare, with a couple of Redoubt riders and a whole lot of tufts! I am using so many tufts this year.
In case you missed the post on BigRedBatCave, here are the earlier markers I finished. This is the most markers I've ever completed for a game,. I'm really pleased with them. I'm looking at the battlefield itself, today, marking up cloths and testing the build of the big hill. 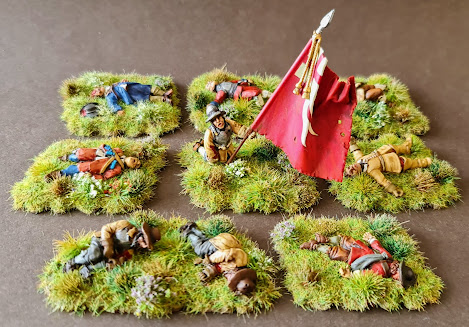 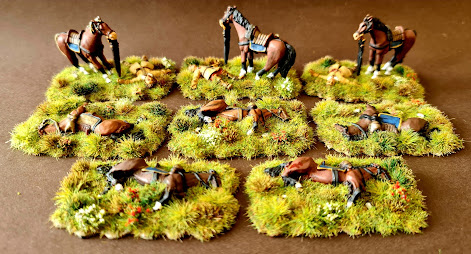