Heroes in a half shell 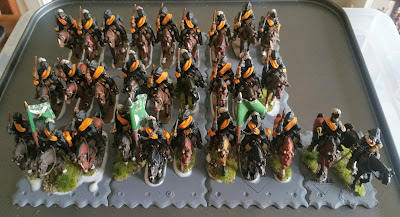 A terrible, quickly snatched (clickable) photo, just for Millsy. Hesilrige's lobsters mustering on my new bases for "horse". They  are in the deeper Dutch formation, relying primarily on firepower.
Posted by BigRedBat at 03:30 6 comments:

Here's the latest regiment for my For King and Parliament project; Sir Allen Apsley's regiment from Hopton's Royalist army. All photos are clickable!

Below, the regiment ready for melee, with the command stand behind. The pike stand are in the red coats, trousers and monteros of the Oxford army- later I will swap them out for some more down-at-heel campaigning minis in grey trousers, in attaching poses. 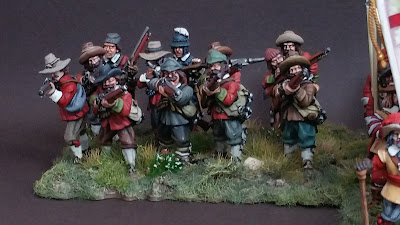 The quality of the painting on these is stunning; the shot, above, were painted either by David Imrie or by Chris Meacham, who painted the command minis, below. I merely did the flags (again, lovely Flags of War) and based on the new Batbases I designed for the ECW (not yet in the BigRedBatShop). Here's a first; I flocked the edges of the bases. Works really well... 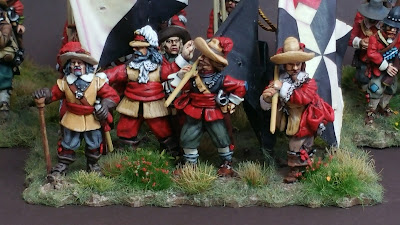 Most of the minis are lovely Bicornes, with some Renegades mixed in. I love the look of the pikes massed behind the command (below). 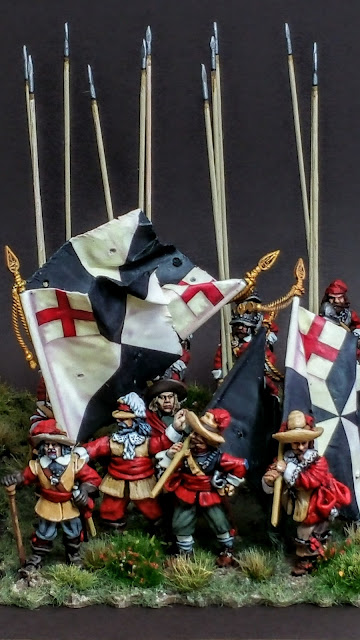 That's it for now; In a couple of weeks I hope too finish the first cavalry regiment!
Posted by BigRedBat at 05:08 8 comments: 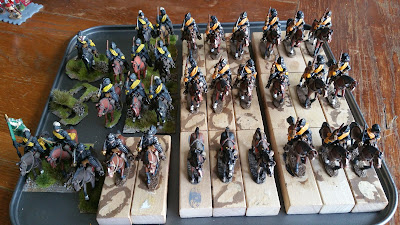 ....being Sir Arthur Hesilrige's famous regiment. This is my first ECW cavalry regiment, based around a dozen minis from David Imrie (left) and another 17 from Shaun McTague (right). I have decided to give them all tawny orange sashes and am half way through a repaint. Lots of finishing work to be done!
Posted by BigRedBat at 05:10 No comments: 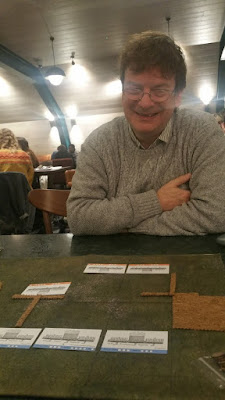 Last night chum Ian and I play tested an aspect of the FK&P rules in our Muswell Hill office- the "Mossy Well", using a "travel set" that Ian has made, on a 3' x 4' 10cm plains mat. Great fun... even though all my troops ran away.
Posted by BigRedBat at 01:57 No comments:

Here's another regiment arriving at the For King And Parliament muster- my first Parliamentarians, the Earl of Essex's or Lord General's regiment (all photos clickable). They started the Civil War in pretty tawny uniforms, as described on the excellent BCW site. 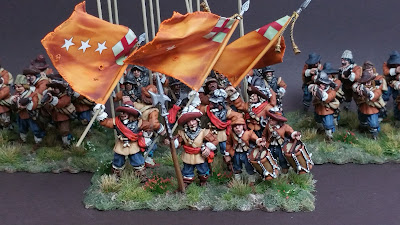 Mostly Renegade with lovely Bicorne command, these were all painted (or repainted from eBay purchases) by Shaun McTague- I highlighted, added the super Flags of War flags and based on my custom wobbly-edged ECW bases. I was very pleased how the standards appear like they are being waved together in a display.

Above, the command base can be in front at the start of the battle, and moved behind once the shooting starts- the flags look great through the pike. I was also very pleased with how the pike casualties came out- I'm trying to use more casualties in this army.
Posted by BigRedBat at 10:06 4 comments:

I have finished some more units- here is the first, Colonel James Wardlawe’s dragoons. These beautiful (and very clickable) minis were painted by David Imrie, Chris Meacham and Meic Kelly, I have merely rebased onto five of my new wobbly bases- very pleased how this worked out. The minis are Bicorne and flag is from Flags of War. I'm really chuffed with them! I'll need some horse holders in due course...
Posted by BigRedBat at 07:59 8 comments: